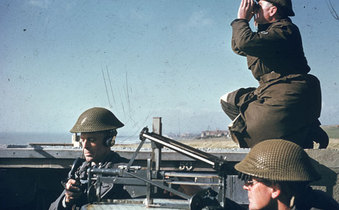 On 18 June 1940, Churchill gave a rousing speech to the British people, announcing: "... the Battle of France is over. The Battle of Britain is about to begin." Four days later, France surrendered to Germany and Hitler turned his attention to Britain. German air superiority in the south of England was essential before Hitler could contemplate an invasion so Hermann Goering, the head of the Luftwaffe, was instructed that the RAF must be ". . .beaten down so that it can no longer muster any power of attack against the German crossing".
The battle began in mid-July and, initially, the Luftwaffe concentrated on attacking shipping in the English Channel and attacking coastal towns and defences. From 12 August, Goering shifted his focus to the destruction of the RAF, attacking airfields and radar bases. Convinced that Fighter Command was now close to defeat, he also tried to force air battles between fighter planes to definitively break British strength. However, Goering grew frustrated by the large number of British planes that were still fighting off his attacks. On 4 September, the Luftwaffe switched tactics again and, on Hitler's orders, set about destroying London and other major cities.
Eleven days later, on what became known as 'Battle of Britain Day', the RAF savaged the huge incoming Luftwaffe formations in the skies above London and the south coast.   It was now clear to Hitler that his air force had failed to gain air superiority so, on 17 September, he postponed his plans to invade Britain. His attention was now focused on the invasion of the Soviet Union, although the Luftwaffe continued to bomb Britain until the end of the war.      It is estimated that between 10 July and the end of October 1940, the RAF lost around 1,023 aircraft whilst the Luftwaffe lost 1,887.

“Arguably the most valuable of the voluntary services during the Battle of Britain was the Observer Corps.” (Jon Lake)

Whilst the radar tracked incoming enemy aircraft over the sea, it was not as effective at doing this once they had crossed land. It was the task of the Observer Corps to do just this – track enemy aircraft movements overland. Many of the volunteers for the Observer Corps were enthusiasts with regards to aviation; and were well versed in identifying incoming Luftwaffe aircraft.
The RAF took over the Observer Corps in 1939 & a retired Air Commodore was appointed Commandant. There were five Observer Corps Areas, sixteen Groups and a Corps Headquarters located with Fighter Command at Bentley Priory.
The Observers on the ground used whatever devices they could find to estimate the height at which Luftwaffe formations flew and their bearing. Numbers and types of aircraft were also relayed back to a Group Headquarters. In these headquarters a ‘picture’ of what was developing was created and that information was sent to RAF sector, Group and Command Operations rooms. Combined with information from Chain Home and Chain Home Low stations, Fighter Command could assess which incoming raid needed most attention because of the threat it raised.
Observer Corps was manned for the duration of the war in Europe. Their posts were first manned ‘in anger’ on August 24th 1939. In 1941, King George VI th. granted the prefix ‘Royal’ to the Corp’s title, in recognition of its vital contribution in winning the Battle of Britain.