​Read the letter sent to

from our National Chairman

Terry had met Her Majesty even before he had met me…  The first time was at a formal dinner in 1975 at RAF High Wycombe, during his earlier days in the Royal Observer Corps.

He was selected to carry the ROC Banner, and, unusually, to stay with it throughout the dinner.  Her Majesty spoke to him after the meal ended, and asked politely whether he had eaten.  He had already been given 10 minutes to devour a three course meal (that must account for his speed these days!) as the admin officer knew that Her Majesty would ask!

Only later was Terry informed that he was required to stay where he was, behind Her Majesty, because he was between her and a plate glass window…. this was in the time of heightened security, so effectively, if someone had attempted to shoot her from outside, Terry would have stopped the bullet!
​
The second photograph above was taken at RAF Bentley Priory, the administrative HQ of the Corps, at a parade and Royal Garden Party in 1985, when he was Group Commandant of Oxford Group. 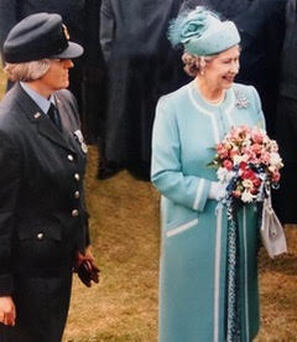 I had attended a Royal Garden Party at Buckingham Palace with Terry as my guest in 1989, soon after I became Group Commandant of Bedford Group, which meant that I unfortunately had to wear uniform rather than finery!

We didn’t set eyes on the Queen; I did think that I saw Princess Diana in the far distance, but that was it!

The photograph above was taken in 1991, when we attended another Royal Garden Party, at Bentley Priory – this time shortly before the stand-down of the Corps, so it was not a particularly happy occasion.  As the Queen approached my Observers, I gave the official curtsy immediately followed by the salute (which always seemed to me a slightly ridiculous combination) and greeted Her Majesty, asking if I could introduce her to some of my Observers.  She ignored me completely, walked past, started to chat to them, and never looked back!  I know my place….. 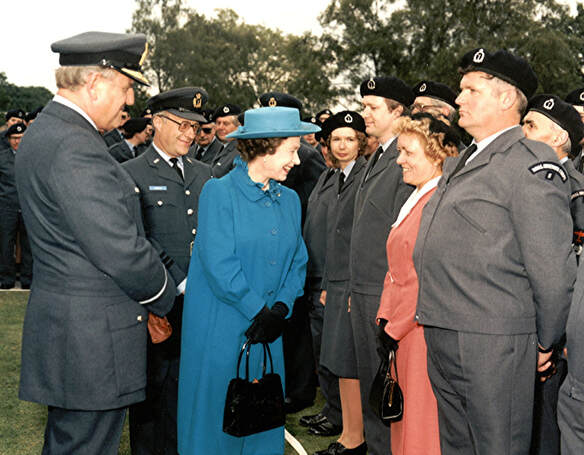 It was back in 1985 at RAF Bentley Priory, during the Her Majesty’s Review of the ROC.

At that time, I was Group Commandant 7 Group Bedford and, along with the other 24 GC’s, was tasked with introducing six members of the Group to our Air Commodore in Chief.

When Her Majesty approached it seemed that all logic deserted me as I introduced my selected few on the front rank. It started well but, halfway along, I got one lady members name wrong!  I was horrified but kept going as instructed at the briefing.

It was sometime after the Royal Party had left before I had the chance to seek out the unfortunate lady and offer my humble apologies. She asked what was I apologising for and, when I explained, she told me that she hadn’t heard a word I said!  She was so in awe of that magic moment in meeting the Queen.

The story behind these two photographs was that new Sovereign's Banner was not the same size, or the pike was longer, or the old one had been stretched!  Hence, I couldn't hold the tail of the new one correctly and had been fidgeting during the long period of the speeches.

I mentioned the problem when we met and she said that she could see the problem I had but praised me for coping and we both smiled.  Her Equerry said later that she never misses anything. I wonder what her thoughts were on the whole Royal Review? All the Senior Officers have now passed on so we will never know!