Services took place around the country, on Sunday the 18th September,  to commemorate the
Battle of Britain. Here are some pictures and reports from members.

This years annual service to commemorate the Battle of Britain was held on Sunday 18th September 18th. There were two ROCA Standard Bearers in the parade at the entrance to the main door.   These were Chris Shire of No. 12 Group Bristol and Jacqui Giles of No 1 Group Maidstone.
Attendance from ROCA members was mainly from 21 Group with:  Margaret Sheraton, Maureen Somerville, Bob Campbell and Colin Johnson. Who had served at the NBCC Cell in Greenook. There were also several members from other Groups.

The weather was good and all were hopeful of a later fly-past. It was also hoped that Terresa May would be present but she was away and no other MP's were spotted.

During the service the 'Few' (ex Battle of Britain pilots) walked down the aisle behind the RAF Guard of Honour carrying the large Book of Remembrance. This year it was only down to about five ex brave aircrew.  However, it was good that the contribution made by the Observer Corps to the battle was mentioned during the sermon.

After everyone emerged from the service the weather was still good and they made their way to the grass area behind the Abbey to await the flypast. This year it was a single Spitfire which made a couple of passes over the Abbey. Recognition skills were not good enough to give us the Spitfire Mark number or the name of the pilot. As is tradition on ROCA occasions many then retired to a local pub for a pint and a good meal.

This had been a busy weekend for some of the Heritage Team. The day before they had a wartime ROC Post display at Bentley Priory for their special Battle of Britain Day.  This was set up on the outside balcony and used the Post Instrument loaned for the day from Air Chief Marshall Dowding's office.  I am glad to report that our friends from 21 Group had also arranged to attend Bentley Priory that day as well.

Finally, it is sad that I have to report that the tickets used, other than those used by those named above, were not part of the ROCA allocation. This was yet another false accusation put onto a FaceBook Group run by Bob McIntosh (who is not even an ROCA member). They were obtained directly from the Royal British Legion, as are tickets for other prestigious occasions, to relieve pressure on the Association. 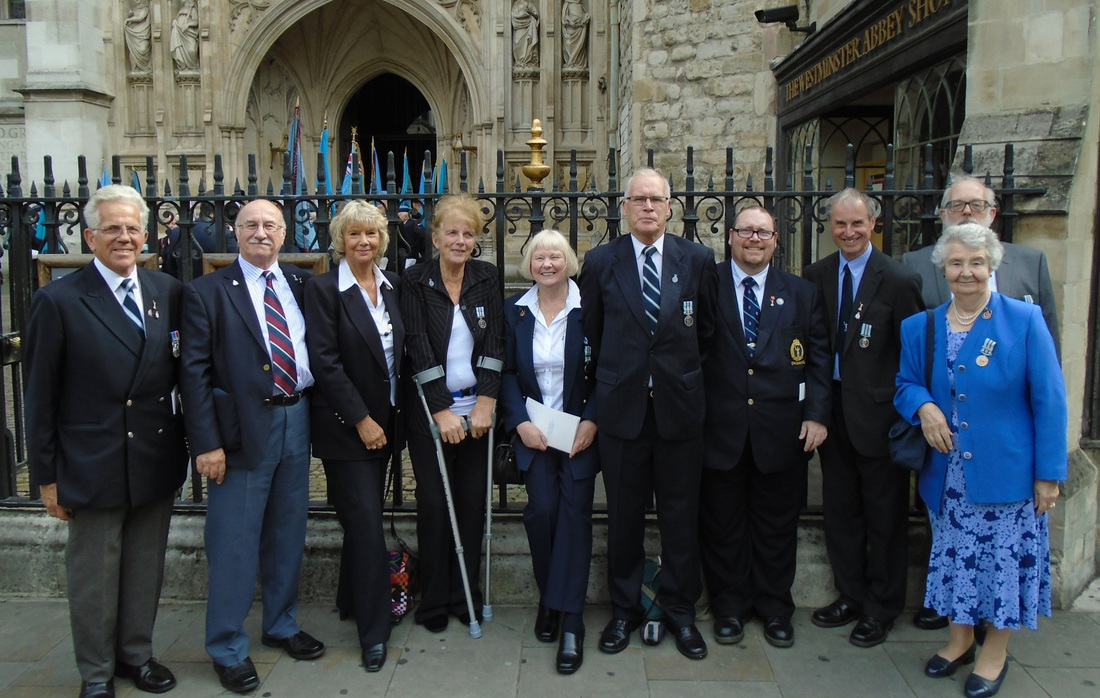 On Sunday, 18th September 2016 RAF Linton-on-Ouse held its Battle of Britain Service in York Minster.  As is usual, Standard Bearers attended a rehearsal at York Minster on the Friday morning before the event.  This year, the service itself was preceded by station personnel exercising their Freedom of the City of York with a parade through the city ‘with colours flying, swords drawn, bayonets fixed, drums beating, bugles sounding and bands playing’.  The parade was drawn up on Duncombe Place, outside the West Door of the Minster and including Standards and a veterans Flight, to be inspected by the VIPs (in the case of the veterans, by the Lord Lieutenant), before the station Flights set off on their march through York.  Whilst all were on Duncombe Place there was an immaculate flypast by nine of Linton’s Tucano aircraft, in diamond nine formation.  During the service the ROCA National Standard was the ‘senior’ Standard, giving precedence only to the Standard of 72(R) Squadron from Linton.  It was therefore second to be slow marched down the centre aisle to a prominent position at the altar.  As always, the service was dignified and moving and included the turning of the page in the Book of Remembrance by former 219 Squadron Battle of Britain veteran, Terry Clark.  Again, the event was reported in local media, including television news.  Thanks are due to Brian Tomlinson who carried the Group Standard and to Mike Munday and Terry Baynes who acted as escorts to the National Standard. 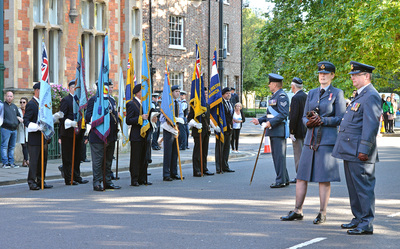 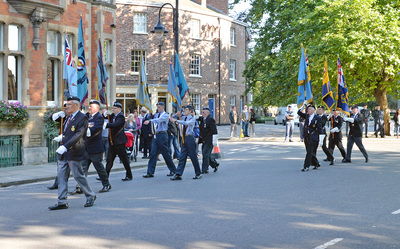 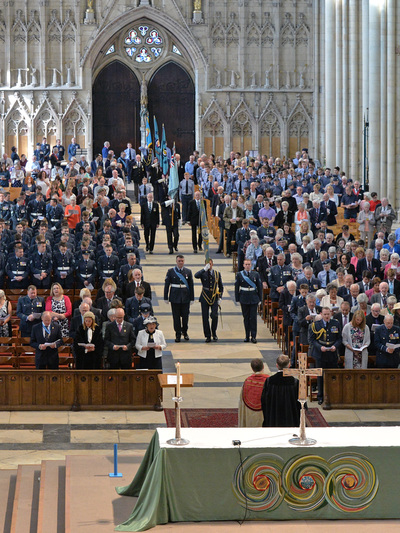 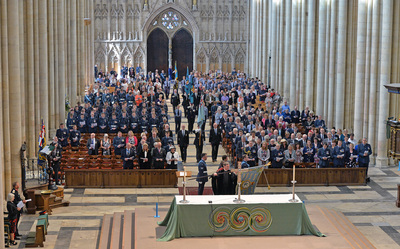 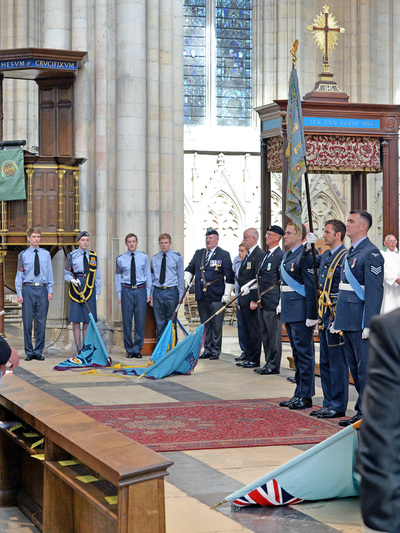 The photos were taken at the Joint Helicopter Command, Flying Station, Aldergrove on Sunday 18th September 2016.
The occasion was the Annual Battle of Britain Parade and Church Service to which 31Group ROCA are always invited to attend along with Standard.
It was my pleasure to be 31Group ROCA Standard Bearer on this occasion.
The Group Captain present was Harvey Smyth, currently OC RAF Marham Lightning II operations.
He is from Northern Ireland and was especially welcome on this occasion.
Included in the event was the Graduation Parade of yet another Flight of New Recruits for 502 Sqdn (N.I) Royal Auxiliary Air Force.
Photos of the March Past led by the 1st Batt Royal Irish Regiment Band, show the Group Captain and the Lord Lieutenant for Co Antrim Mrs Joan Christie taking the salute.
Then followed the Service in the gymnasium/hangar with refreshments afterwards.
Incidentally, the Group Captain has very kindly agreed to be Patron for the Ulster Aviation Society which has pleased us all so much. 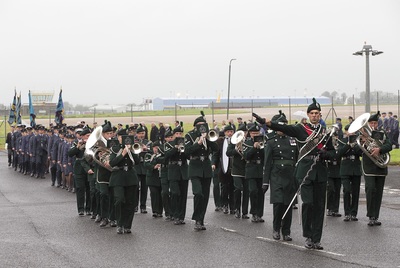 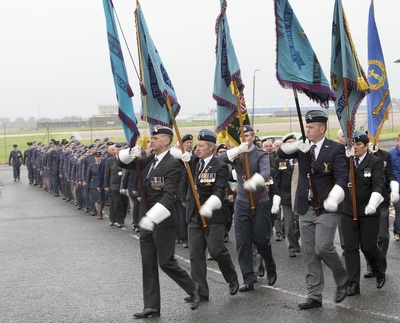 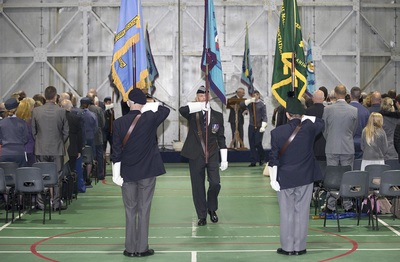 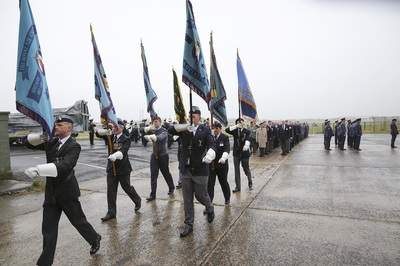 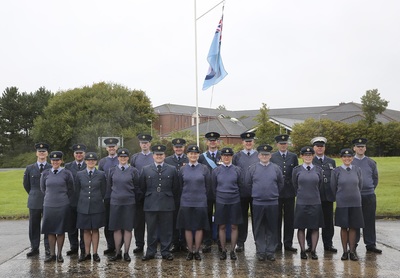 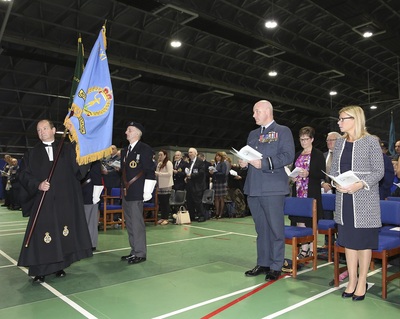