This website was set up in October 2012 and is the new official site for the Royal Observer Corps Association.
Battle of Britain 82nd Anniversary 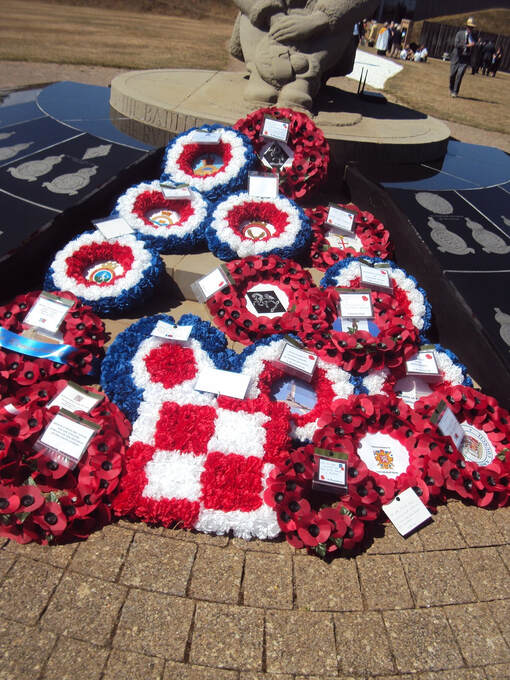 Capel le Ferne
​
Sunday 10 July started with a clear blue sky and the temperature rising as we drove to the National Memorial to The Few. Have parked we could clearly see the coast of France and across the Romney Marshes to Dungeness. It was to be a smaller closed affair with the site closed to the public. Six Veterans Standards were expected with the RAF Regiment Association and the Polish Air Force Association as the senior on parade supported by three RAFA and the No 1 Group ROCA carried by Jacqui Giles. The first challenge for Terry Giles, the Standards Marshall, was to contact the Parade Marshall from the Air Cadets rather than the Queens Colour Squadron who normally organise and carry out the lead duty then to hand the ROCA wreath to Robin Green who had agreed to lay it on our behalf. He is a Trustee of the Memorial and a former Crew Officer in No 1 Group Maidstone

The Sovereign’s Colour of the Royal Auxiliary Air Force was on parade with the Kent Wing Band of the Air Cadets. The guest of Honour was the Chief of the Air Staff, Air Chief Marshall Sir Mike Wigston. After two rehearsals we finally formed up ready for the start of the events that was opened by a fly past of the BBMF Mk 1 Spitfire that had flown during the Battle of Britain. The Observer Corps role in the months of aerial warfare over Britain was mentioned several times during the Service by The Venerable Ray Pentland, a former Chaplain in Chief to the RAF and a Memorial Trustee. The response from the Chief of the Air Staff also contained reference to the work of the Observer Corps.

Having fried in the blazing sunshine during the service and wreath laying, we marched off successfully despite aching joints from the long stand. The day ended successfully as I waylaid CAS who came over to speak to the Standard Bearers and brought with him the Lord Lieutenant, Lady Colgrain, who was charming. Sir Mike Wigston regaled us with his time in the ROC on Capel Curig Post in North Wales - a friend of the ROC.  Jacqui tried to get him to join ROCA but he didn’t respond to the offer.

With no other ROCA attendees, the only photograph is of the one I took of the wreaths at the end of the day where you can clearly see the ROCA wreath that Robin Green laid.  By this time Jacqui and I were looking rather pink from all the sunshine, hence time for the long drive home.