Thursday, 12th September 2013 in the presence of their Royal Highnesses The Prince of Wales and The Duchess of Cornwall

On Thursday, 12th September the ROCA Chairman, John Sharpe, and I were privileged to attend the official opening of the Museum, John because he is our Chairman and myself because I have been a volunteer helping at the events for several years and also because I am the liaison person between Bentley Priory and National Committee.   The Project Manager, Erica Ferguson, apologised to me beforehand that she was unable to give more invitations to ROCA members because she wished to concentrate on honouring the Battle of Britain Pilots and the ladies who worked in the Filter Room.
The weather was kind.   The Opening Address was given by Sir Brian Burridge, Chair of Trustees Bentley Priory Battle of Britain Trust, this was followed by the unveiling of the Bust of Air Chief Marshal Hugh Dowding by HRH The Prince of Wales and the Ceremonial Raising of the RAF Ensign.    The flypast of the Battle of Britain Memorial Flight interrupted HRH’s speech but he spoke between the many passes and seemed to be enjoying the experience with great smiles from he and The Duchess.
The poem ‘To a Fellow Pilot’ was read by a young Air Cadet from the Hendon Squadron.   The magnificent sound of the Central Band of the RAF was heard during the afternoon and latterly the Harrow Apollo Male Choir.
An extra dedication was given to a bench in the gardens, I believe donated by Barratt’s the Builders, this was to Flight Lieutenant William Walker, the dedication was lead by The Venerable (AVM) Pentland.

The interior of the Museum is absolutely wonderful, a great credit to all who have been working on the detail for the past years.  The ROC does have several mentions – the plotting table behind AVM Dowding is the ROC table showing Horsham and other Groups, there is a board dedicated to the ROC in the Filter Room and our own John Simmonds has a ‘memory board’ with photograph and details of how he and Michael Lee spotted the fire at the Priory when they arrived for the NRC training meeting.   PLUS the painting of HM The Queen, wearing the ROC brooch with the plaque showing that the ROC presented it to RAF Bentley Priory, hangs over the fireplace in the Ante-Room, now called The Ballroom.   This means HM will preside over many prestigious events which will be held in this room, the funds from which will help keep the Museum afloat into the future.

The Trustees are still in desperate need of funds to complete the task.  The project has so far cost £13 million and £250,000 is still needed to complete the task.
If sending a donation, please mention the ROC.
Cheques should be made payable to:  The Bentley Priory Battle of Britain Trust – or it is possible to donate
on the website at  www.bentleypriory.org.    Mailing address is:  Wendleberie, Moor Common, Lane End, Bucks, HP14 3HS.

Unfortunately the Museum will not be opening to the public until January 2014 but Group visits are possible – I am in the process of finding a date for an  Association visit this autumn, I will keep you informed and if you are in striking distance you will be very welcome to join us.

I was pleased to see that the Sheffield Lace has been returned to its rightful place in the Priory.  As many will know, this was made between 1942 and 1946 by lace making firm Dobson & Browne Ltd ‘To perpetuate this glorious epic in our history and as a tribute to those who gallantly saved this island’.    It measures 15 ft long by 65 inches wide and depicts various scenes witnessed during the bombing of London, the badges of the Allied Air Forces involved together with Sir Winston Churchill’s immortal words ‘Never was so much owed by so many to so few' 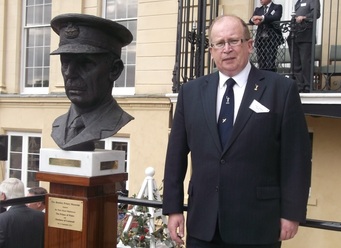