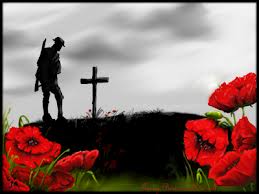 The world’s first global conflict, the “Great War”, pitted the Central Powers of Germany, Austria-Hungary and the Ottoman Empire against the Allied forces of Great Britain, the United States, France, Russia, Italy and Japan.   Germany and France had been at odds since the Franco-Prussian War of 1870-71, after which Germany had annexed the French provinces of Alsace-Lorraine.  Germany’s strategy for a war against France and Russia envisaged first defeating France quickly, outflanking France’s border fortresses by invading via Luxemburg and Belgium. Once Russia mobilized the Germans declared war on both Russia and France (1 and 3 August) and demanded that Belgium allow them to cross its territory.
Britain, Germany, and France had all committed themselves to respect Belgian independence by the 1839 Treaty of London. As Germany failed to comply with a demand to respect Belgium, on 4 August, Britain declared war.     In October of 1914, the First Battle of Ypres finds countries battling to control ports in Northern France. The muddy struggle of trench warfare is many soldiers’ first taste of the Great War.   Soldiers fought largely in trenches during the war, and thousands suffered from stress, known as shell-shock.  The British and French trenches were often squalid, whereas the German trenches were almost luxurious in comparison, with bunks and decent cooking facilities.
On Christmas Eve, 1914, both sides declared an unofficial truce and sang Christmas carols to each other. A football match was played in no-man’s land (the area between the German and British) trenches, and German and British soldiers exchanged food and souvenirs. The following Christmas, sentries on both sides had orders to shoot any soldier who did this.   Cannons and artillery were often extremely loud. In 1917, the explosives used to destroy a bridge in France could be heard over 130 miles away in London.
Many new weapons were invented or first used during World War 1. Big Bertha was one of the most famous; it was a 48 ton gun capable of firing a shell over 9 miles. It took 200 men several hours to assemble the gun.
By the end of WW1, over 9 million soldiers had been killed, and another 21 million wounded. Over a million soldiers were killed in the infamous Battle of the Somme alone, including about 30,000 in just one day.   Around 11 percent of the population of France was killed or wounded during the war. About 116,000 Americans were killed, even though the US was only in the war for about 7 months.

AT THE GOING DOWN OF THE SUN, AND IN THE MORNING - WE WILL REMEMBER THEM 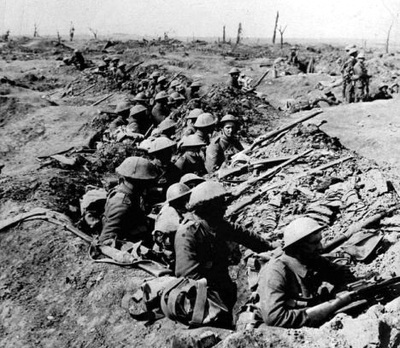 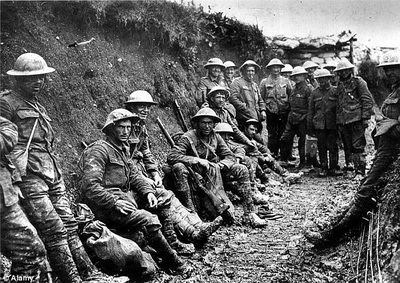 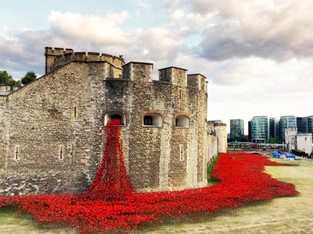 The POPPIES at the TOWER

Artist Paul Cummins & Stage Designer Tom Piper created the Ceramic Poppy field in the Moat around the Tower of London.
888,246 ceramic poppies were planted – one for each British and Commonwealth fatality during World War 1
The first Poppy was planted on 17th of July 2014 the last one on November 11th the 96th anniversary of the Armistice in 1918.
To trace the history of the Remembrance Poppy, we have to journey back to a time and place stripped of almost all beauty and compassion. Belgian Flanders represented the northernmost point of the Western Front during the First World War, once the trenchlines had been inscribed in the earth by the end of 1914. Between 1914 and 1918, Flanders became one of the most devastated regions of the entire battlefield.
Yet, as many soldiers noticed, in Flanders and in other regions of the blasted frontline, nature had still not given up on the land. Papaver rhoeas is known by many other common names – corn poppy, corn rose, field poppy, red poppy and red weed. The last name is revealing, for although this member of the poppy family produces a beautiful vivid red flower, it is nonetheless classified as a weed. It grows in the most ravaged and inhospitable of land (indeed it thrives best in soil that has been disturbed), hence it managed to add a haunting dash of colour to the shell-thrashed landscape of Flanders. Another of its common names is the Flanders Poppy.
To see such beautiful flowers growing across fields that were already sown with the bodies of thousands of dead men must have left an impression on the minds of all who witnessed it, the flowers delivering a curiously mixed evocation of the red blood of the fallen yet the regeneration of new life. One man who was captured by the vision was the Canadian soldier Lieutenant-Colonel John Alexander McCrae.
McCrae was born on 30 November 1872, and went on to combine strong careers in medicine and soldiering. A man with an adventurous mindset, McCrae became a field surgeon with the Canadian Expeditionary Force (CEF) and British forces on the Western Front in the First World War. During this service, he managed a field hospital taking in casualties from the Second Battle of Ypres, a job requiring the utmost strength of character to endure mentally. In a letter to his mother, he remembered:

“For seventeen days and seventeen nights none of us have had our clothes off, nor our boots even, except occasionally. In all that time while I was awake, gunfire and rifle fire never ceased for sixty seconds... And behind it all was the constant background of the sights of the dead, the wounded, the maimed, and a terrible anxiety lest the line should give way.”

McCrae also suffered personal loss – his friend and former student Lieutenant Alexis Helmer was killed in action. McCrae conducted the burial service himself, but during this time he also noticed the red poppies growing obstinately throughout the Flanders landscape. Being a man of literary talents, the poppies and his dead friend began to stir a poetic vision that would move generations to come. The origins of McCrae’s poem “In Flanders Fields” are uncertain, in terms of when and where he first composed it, but he became convinced of its merit and spent months working it into shape. He eventually submitted it to The Spectator magazine, but it was rejected. Yet his next submission, to Punch, was accepted, and it was published on 8 December 1915.

“In Flanders Fields” had an enormous effect on the reading public. It was translated into dozens of languages and achieved global distribution. Such was the power of the poem that it endured the war years to become a staple classic of the particular genre known as “war poetry”.
Above text and pictures extracted from the Internet. Ed. 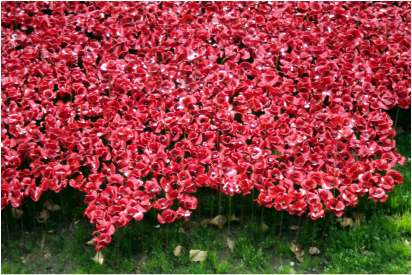 Some of the Ceramic Poppies at The Tower of London - Photograph by Oliver Giles
In Flanders fields the poppies blow
Between the crosses, row on row,
That mark our place; and in the sky
The larks, still bravely singing, fly
Scarce heard amid the guns below.

We are the Dead. Short days ago
We lived, felt dawn, saw sunset glow,
Loved and were loved, and now we lie
In Flanders fields.

Take up our quarrel with the foe:
To you from failing hands we throw
The torch; be yours to hold it high.
If ye break faith with us who die
We shall not sleep, though poppies grow
In Flanders fields.

Thursday November 6th. - St. Margaret's Field of Remembrance Westminster - from Terry Giles No 1 Group
The weather was kind, chilly but most importantly it was dry on the 06 November for the day at Westminster Abbey. This was the first opportunity for Jacqui and I to take part in this Act of Remembrance and it was taken with great pride. It was an experience not to be missed. HRH Price Harry was the VVIP and after the short service he walked around, shook hands with all those in front of the plots and spoke to everyone.
The first Field of Remembrance was held in the grounds of Westminster Abbey in November 1928. That year only two Remembrance Tribute Crosses were planted. But it began a tradition that took root and has grown and grown over the decades. Each Poppy Cross carries a personal message to someone who lost his or her life in the Service of our country. I usually plant one to my father buried at Altdorf, killed whilst on operations with 620 Squadron Bomber Command and another to a fellow Petty Officer, one of seven shipmates from HMS Bulwark killed during operations in Sarawak.
Despite the solemnity of the occasion it was a very relaxed atmosphere. As with Cenotaph Parade there was a great family bond – the services family – amongst those attending. As we waited and after I chatted to the War Widows and the Police either side of our plot and the Burma Star Vets opposite exchanging jungle experiences. I had visitors one from the Royal Engineers and ROC 15 Group (a ROCA member), also Bomber Command Veteran who was ex 5 Group then 4 Group. I knew some of the other attendees from events where I have carried the Group Standard.   Click on photos for a larger image
Click here    to read Maidstone Groups Remembrance file 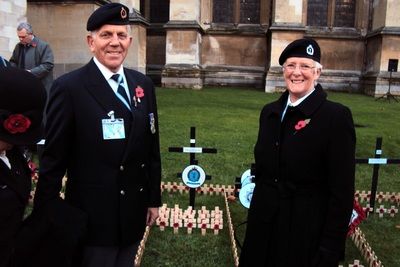 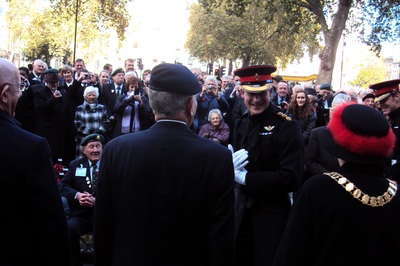 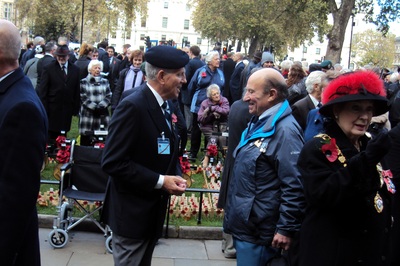 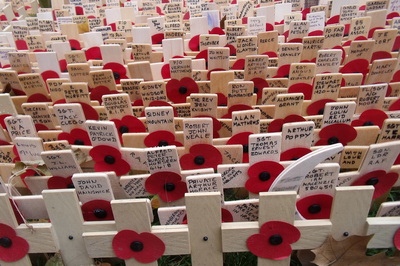 Sunday November 9th. Remembrance Day Parade at The Cenotaph London   from Edwina Holden 7 Group
The day dawned bright and dry, about 50 members gathered on Horseguards Parade for the Cenotaph Parade;   in the absence of Tony Whittle we had a new Parade Marshal, Stan Robinson of No 7 Group.   The National Chairman had left home at 4am to be with us and flew home later that day such is his commitment to the Association and the laying of the wreath.   As usual we found the contingents alongside us in Whitehall very friendly as were the Police who this year had a particularly difficult job looking after the security of everyone involved.
Following the Parade several of us went for lunch at the RAF Club organised by Stan Robinson who had sourced three items of ‘mess silver’ for the tables.   One was a Beacon Lighter which had been presented to Western Area in the past, a second presented to Bedford Group and the third a trophy given by LMK, Denmark, in connection with their aircraft recognition competition, these were particularly welcome as we had not seen them before, they have now been returned to their home at the Uxbridge bunker.
Photos:- Top row by David Peace of 8 Group.
Bottom three rows copyright of Cenotaph official photographer Harald Joergens.
These can be ordered on line at www.HaraldJoergens.com      Click on an image for larger picture. 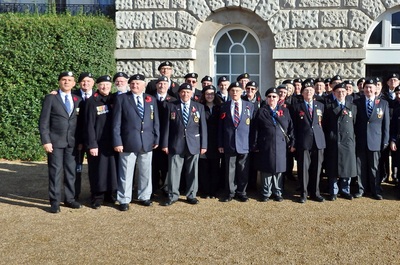 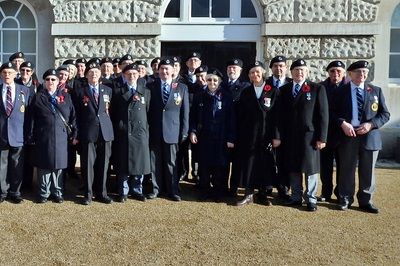 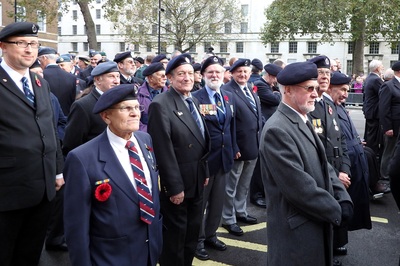 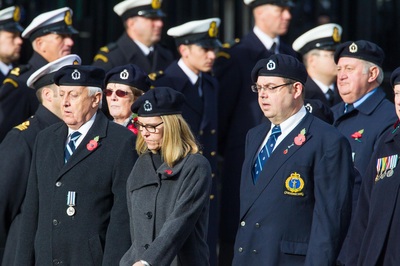 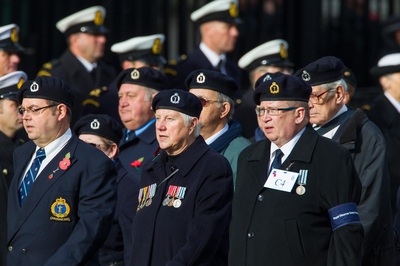 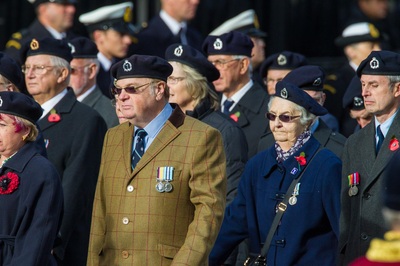 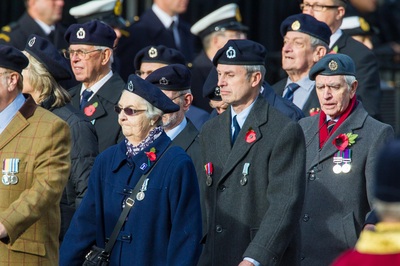 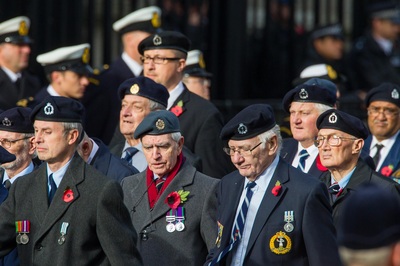 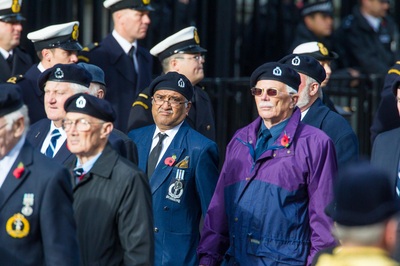 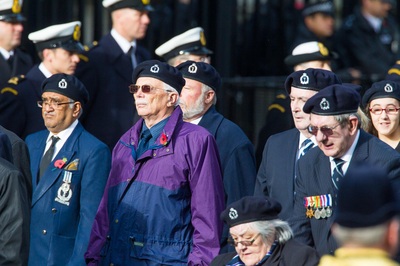 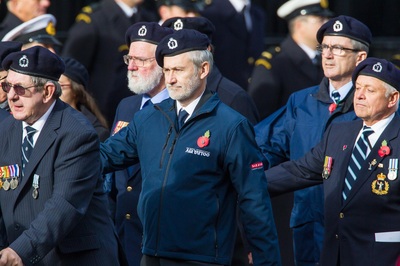 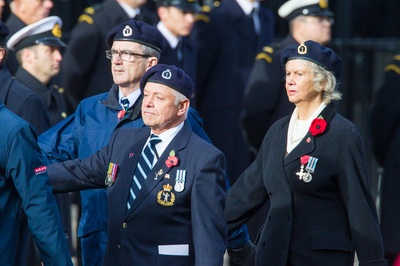