This website was set up in October 2012 and is the new official site for the Royal Observer Corps Association.
20 Group paraded the National Standard of the Royal Observer Corps Association 31st Allied Air Forces Memorial Day at the Allied Air Forces Memorial & Yorkshire Air Museum, Elvington on Sunday 4th September 2016, which was attended by around 2000 visitors and participants from all over the country.  This year, the ceremony particularly commemorated the Centenary of the Battle of the Somme, in addition to marking the contribution of allied service personnel who served in conflicts from WWI to the present day.  The occasion represented a coming together of nations to reflect upon the sacrifice made by so many.  Elvington has a particular connection with the French Air Force, as two Free French bomber squadrons flew from the airfield during WWII.  French representation and participation is always prominent at the Memorial Day and it was no less so this year.  Indeed, a number of nations and air forces are regularly represented and this year, in addition to representatives from France, air force and diplomatic representatives were in attendance from the Netherlands, Belgium, Finland, Australia, New Zealand, Canada, the United States of America and Russia.
Guest and visitors enjoyed the sight and sound of live aircraft from within the Museum’s collection, as two WWI fighters ran their engines, with re-enactors in period uniform in attendance, again reflecting on the Battle of the Somme.  The beautiful WWII Douglas Dakota, an aircraft historically associated with the D-Day Invasion and other airborne campaigns, also roared to life amidst a plume of smoke.  Lastly, Nimrod MR2 XV250, known as the “Mighty Hunter”, was powered up with her four Rolls Royce Spey engines providing some real thunder for people to enjoy.
Following this the focus turned to the parade, which was ably led by the Yorkshire Military Band & Thirsk Royal British Legion Band Corps of Drums.  The National and County Standards of the Royal Air Forces Association, Royal British Legion and Royal Observer Corps Association led thirty five other regional Service Association and Squadron Standards present on the day, including ROCA Standards from 15, 20 and 23 Groups.  The Museum’s Press Release for the occasion noted, “It is not often that these National Standards are seen together, making an impressive turnout”.   The salute was taken by the Lord Lieutenants of North and East Yorkshire, along with senior international air force representatives and other civic dignitaries from across the region and beyond.  The Standards were marched into a Drum Head Service in the Main Display Hangar, with the background of the stunning WWII Halifax bomber.  The National Standards were laid over the Drum Head as a focal point for the Service.  Bringing additional poignancy to the occasion, the Légion d’Honneur was presented to five Normandy Veterans by Mr. Jeremy Burton, the French Consul to Yorkshire and the French Defence Attaché Contre Amiral Patrick Chevallereau, who gave the declaration of thanks on behalf of the French Government and pinned the medals on their blazers in a proud moment for the veterans and their families.  This emotional part of the ceremony brought tears to the eyes of many in the congregation and ended with a warm, extended standing ovation for the veterans.
Following the Service, another highlight was an evocative flypast by the Lancaster bomber of the Battle of Britain Memorial Flight, which made three graceful, low swoops over the Museum.  The awesome sight drew gasps of admiration from the crowd, with the beautiful roar of the famous Merlin engines stirring the hearts of all.
As the Lancaster retreated into the distance, the Parade was re-formed for the traditional Marchpast for the ‘Sunset Ceremony’, which saw the dipping of Standards and lowering of the ensign by Air Training Corps Cadets, accompanied by the Evening Hymn played by the Band and Corps of Drums.
In a separate sortie, Hurricane and Spitfire fighters of the Battle of Britain Memorial Flight provided a splendid finale to the event, roaring in for four full, low passes over the crowds. The aircraft themselves were quite significant.  Spitfire P7350 Mk.IIa is the oldest example flying in the world, and flew in the Battle of Britain. It currently flies in the colours of top scoring Battle of Britain ace Eric Lock, who on the 5th September 1940 destroyed three enemy aircraft in one sortie.  Hurricane PZ865 Mk. IIc is the last Hurricane ever built, entering service in July 1944.  It was truly wonderful to see these historic aircraft in the skies over Elvington; what a fantastic sight and sound they made!
The event was reported upon by the media, including local TV news that same afternoon.   Air Vice Marshal Richard Knighton, representing the Chief of the Air Staff, later commented on social media: “Excellent Museum, moving service. Great day.” Thoughts which are generally reflective of everyone who attended.

[An excellent video of the day can be found online at http://yorkshireairmuseum.org/latest-news/allied-air-forces-memorial-day-2016-commemorating-aviation-across-years/ .  Sincere thanks are due to Ian Richardson, Communications Manager at The Allied Air Forces Memorial & Yorkshire Air Museum, for his considerable assistance in preparing this report.  Photographs are copyright of the Museum.] 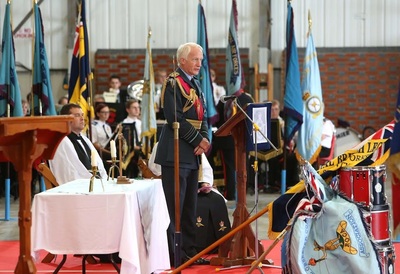 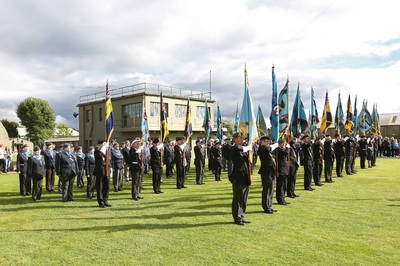