This website was set up in October 2012 and is the new official site for the Royal Observer Corps Association.
Bedford Group Summer Outing to Runneymede and Savill Gardens Saturday 18th August 2010
By John Simmonds

Our group’s most ambitious outing to date was very dependent on good weather but God smiled and gave us one of the most glorious sunny days of the summer. This year’s outing consisted of a combined visit to Savill Gardens in Windsor, followed by a river boat cruise along the Thames.
The Royal Gardens, situated within Windsor Great Park, consists of Savill & Valley Gardens, and is administered  by the Royal Landscape Division of the Royal Estates at Windsor. Our purpose was to visit the smaller of the two - Savill Gardens - which was named after Sir Eric Savill deputy surveyor at Windsor. He secured approval from King George V & Queen Mary in 1934 to produce a garden within the Great Park .  The later Valley Garden regarded as the younger sibling of the Savill Garden wasn’t created until 1946  this is much larger & borders on a magnificent lake called Virginia Water well worth a visit in you are in the Windsor district.
The itinerary for the day was a visit to the garden in the morning, lunch in the Savill building with its grid shell roof, made to look like a leaf, which is completely self supporting covering an area of 90 metres long by 25 metres wide. It incorporates the restaurant, shop and visitor centre.  This in itself was worth a visit just to view its unique construction.  Lunch was followed by a riverboat cruise from Runnymede boathouse

Our party consisted of 37 members, families and friends, a really excellent turnout as this outing was very weather dependant. Especially after our experience of the afternoon rain at last year’s outing at Highclere Castle!
We all met up in the car park at Savill gardens at the prearranged time of 10 AM only to find the doors locked waiting for the official opening time! However it was only a short wait, and we enjoyed a welcome cup of coffee in the restaurant, where I was able to distribute the various tickets for the day’s events
We all agreed that that the gardens, on that splendid Sunday morning, were superb, and the sunshine on the flowers made the colours stand out in their beauty. The various sculptures, intermingled within the garden, were a delightful curiosity to behold.
Lunch in the main restaurant was excellent, with an option of a Sunday roast and other dishes. The meal was rounded off with a nice cup of coffee or tea. We dined extensively but I did miss my pudding which, unfortunately, was not on the menu!
After lunch we all gathered for a group photograph before embarking on our next adventure - the river trip. My main concern at this stage was that our car drivers would not find their way to the next venue the Runnymede Boathouse. This was of course unfounded, because everyone met at the venue in good time, despite negotiating very narrow lanes & confusing signs
The 2 hour cruise was a return trip from Runnymede to Romney Lock, situated just east of the Windsor and Eton road bridge.  Everyone enjoyed their trip on the boat, which was aptly named Bray Royalle. It was exclusively ours with no other parties on board. We made use of the fully equipped bar, and enjoyed a traditional English cream tea with strawberries and scones!   What could be better than that, on a hot sunny Sunday afternoon? This was true paradise for me with my ROCA colleagues, who told me that it was the best summer outing to date .

Our guide pointed out many famous views along the way, including - the actress Beryl Reid’s cottage (it was reported that she left it to her pet cats after her death);  George Michaels mansion,  and views of Windsor Castle from the private park grounds belonging to the Crown. The river bank is protected by security from the royal estate. We also had the extra spectacle of local youths jumping of the river bridges into the middle of the Thames, often a little too close to our boat for comfort.  (And very dangerous thought I whilst enjoying my cream tea and lager!)
However, our 2 hour boat trip was over all to soon. We had a most wonderful day, and I thank the staff of Savill Gardens, and the French Brothers boat crew, for their hard work. I think it all went together pretty flawlessly, and the outing was over almost before it had started, such was an indication of a good day out
This year’s outing was the best to date not only because of the wonderful weather and superb venues – not forgetting our excellent lunch and our cream tea -  but mainly because of the support of all who attended on the day.
As the group social organiser I thank you all for making this year’s outing very special.                                                        John 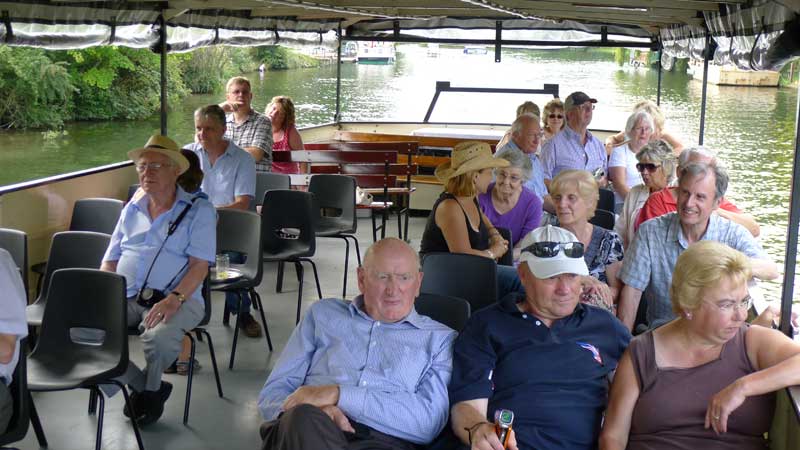