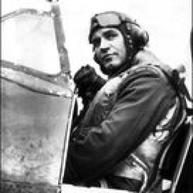 South African Air Force
John Howe began his military flying career in the post-Second World War South African Air Force, and learned to fly in Tiger Moths, Harvards and Spitfires. In 1950 he was posted to No 2 Squadron “The Flying Cheetahs” and deployed to Korea to fly combat missions as part of South Africa's contribution to the Korean War in support of the UN forces.
During his first tour of duty in Korea he flew the Mustang F-51D fighter-bombers in front-line action. A later second tour saw him serving with US Infantry units, as a ground based Forward Air Controller, operating in the thick of the fighting. He was awarded the US Distinguished Flying Cross and the US Air Medal for his service during these actions.

Royal Air Force
When the political situation in South Africa became more difficult and extreme in 1954 he resigned from the SAAF and transferred to the Royal Air Force in the rank of Flying Officer to fly early types of jet fighters. He became a QFI on Vampires, later converting to the Hawker Hunter, and serving the front line North Sea interceptors of No. 222 Squadron RAF at RAF Leuchars in October 1957 as a flight commander on promotion to Flight Lieutenant.
During the Suez crisis in 1956 he had again operated as a Forward Air Controller and landed with the first invasion wave on the beaches with 40 Commando.
After Suez Howe returned to flying duties as a Flight Commander with No. 43 Squadron RAF during which time he was awarded with the Queen’s Commendation for Valuable Service in the Air. 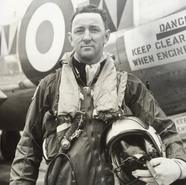 Four years after the Suez debacle Howe was promoted to Squadron Leader in July 1960 and appointed as Officer Commanding No. 74 Squadron RAF the 'Tiger' Squadron, to introduce the first of the supersonic English Electric Lightning interceptors into service with the RAF. Howe also formed and led "The Tigers" RAF aerobatic display team during his time with No. 74 Squadron.
Howe was selected by the RAF to undertake several overseas demonstration tours where he showcased the remarkable capabilities of the new fighter in numerous air displays and demonstrations. He was awarded the AFC on 2 June 1962.
Promoted to Wing Commander in January 1966 his developing career took him to a staff posting at Headquarters RAF Fighter Command, a senior instructor posting at Royal Air Force College Cranwell and later as a senior staff officer at the Joint Warfare School.
​


Following a tour of duty as an Operations Staff Officer, in 1977 Howe moved across the road on promotion to Air Commodore and took up the appointment as the 16th Commandant of the Royal Observer Corps who were also located at Bentley Priory.

Howe applied the same exacting standards and tight discipline to the ROC as he did to his flying. He found an organisation that was superficially sound but with an underlying air of relaxed complacency. His first action was to insist that all wholetime ROC officers, both newly appointed and those already in service, must qualify through the Specialist Entrant and Re-entrant (SERE) Officers Course at RAF College Cranwell. The first intake of five officers to do so attended '157 SERE' in October to November 1979 and Air Commodore Howe was guest of honour at the formal end of course dinner. Also, for the first time in the Corps' history, Howe initiated a two pronged regime of both a Commandant's Command Inspection and Operational Evaluations that would continue until the Corps was stood down. The Command Inspections took place in every group headquarters once every three years, with three months’ prior notice. Howe himself led a two-man team of HQROC staff officers in a two-day detailed review of administration and organisation by the wholetime and spare time staff.

The operation evaluations were a two-day “No Notice” assessment of the group’s operational performance similar to RAF station TACEVALs, from Transition to War right through to prolonged operations under nuclear attack. The OPEVAL evaluation assessors consisted of a joint six-man team from HQROC and the United Kingdom Warning and Monitoring Organisation who would arrive on an irregular basis and place the whole group on a realistic but simulated war footing. By the time Howe’s tenure ended in 1980 the dual regime of inspections left the ROC up to date, more efficient and comparable to any unit in RAF Strike Command and he was subsequently considered to have had a greater impact on the operational efficiency of the ROC than any other post-war Commandant ROC.
Howe also spearheaded the rapid improvement of inter-group communications over the coming years with the introduction of computerised message switching and modern integrated, EMP hardened telephone systems.

During his time with the ROC Howe additionally oversaw the Corps’ contributions to the Silver Jubilee of Elizabeth II celebrations and events and ensured that every advantage was taken to publicise the unsung work of the Corps. On 30 June 1977 Howe led an ROC contingent that took part in the Royal Review of Reserve and Cadet Forces at Wembley Stadium. On 29 July 1977 he attended when the ROC was represented in the indoor exhibition at the Royal Review of the Royal Air Force at RAF Finningley.
Air Commodore Howe handed over command of the ROC to Air Commodore R J Offord on 12 April 1981. 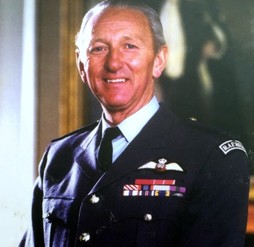 Later RAF service
​
Following his time in charge of the ROC he was promoted to Air Vice-Marshal as AOC Southern Maritime Air Region and his final tour of duty was in the dual roles as Provost Marshal Director General of Security and Commandant General of the RAF Regiment. 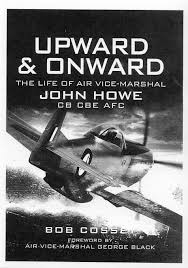 Since retirement, on 30th November 1985, Air Vice-Marshal Howe remained an active member of the No. 74 Squadron RAF's Association and attended the many organised events. His biography, detailing a varied and distinguished military career over forty years and four continents, entitled “Upward and Onward” was published in the late Autumn of 2008.

​     On retirement John and his wife Annabelle retired to their farm in Norfolk. Whilst relaxing it was within view of aircraft landing at Norwich Airport (formally RAF Horsham St Faith) and until closure RAF Coltishall.

Sadly, he was called to his final posting of ‘Little Snoring’ when he passed away on the 27 January 2016